Bullz-Eye chats with the men of “Warrior” 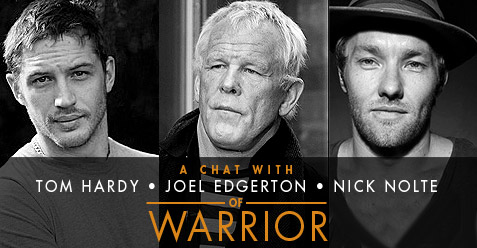 MMA fans can finally relax. “Warrior” is the first film to come out of Hollywood that treats mixed martial arts seriously and with the respect that the sport’s advocates insist it deserves. A populist family-centric tale in the spirit of the early “Rocky” films and innumerable kitchen sink melodramas, “Warrior” brings together likely superstars-to-be Tom Hardy and Joel Edgerton as long-estranged Pittsburgh brothers Tommy and Brendan Conlon. The pair starts out working their respective ways through the world of ultimate fighting for very different reasons. With inexorable movie logic, they end up facing off with a boatload of money and their souls as the purse. In between them is Nick Nolte as Paddy Conlon, the formerly abusive, recovering alcoholic father neither can forgive.

Director/co-writer Gavin O’Connor and stars Tom Hardy, Joel Edgerton and Nick Nolte all had plenty to say to Bullz-Eye and others regarding “Warrior” and their respective careers at a recent press day. Check out a sample of the interview below and then read the full transcript over at Bullz-Eye.

Director Gavin O’Connor on an early test screening of his theoretically very macho movie, which was delayed by over a year of intense post-production work.

The reaction was great in the room. I met [with executives] in the conference room of the studio and the first thing they said to me when I sat down, they said, “You made a chick flick.” Our highest scores – we got in the 90s – were with women, both above 25 and below 25. It was a shocker. I think women are pulled into the emotionality of the story… The movie isn’t about fighting. Even when you get to the fighting, it’s not about that. I call the movie “an intervention in a cage.” That’s what it’s driving towards. One brother saves the other brother’s life by beating the hell out of him.

JE: I think by the time we were doing the fighting in the stadium we were being brought chicken and broccoli every three hours. Then, a protein shake in between. We were eating constantly. It seeped into our lives a little bit. We both still watch [MMA]. You’re still training for other reasons. I do a little bit of fight training, but not as intensely as that. I don’t think I could do that forever. I’ve got respect for the fighters who do that on a constant basis.

TH: We ate a lot of chickens. Normally, the job is about managing other people’s insecurities. Interdepartmental issues, trying to get your point across to somebody. Three weeks into a project you start to realize that you’re panicking, and who isn’t? But when you haven’t eaten any carbs you start to not really hear people, or care. And you’re built like a brick shithouse, and there are tears. And you can’t kick off and have a tantrum in this situation because you are surrounded by real fighters.

Nick Nolte on why his character is repeatedly seen listening to an audiobook of a certain weighty American literary classic in “Warrior.”

A lot of people have said, “Why ‘Moby Dick’?” What does [Captain Ahab] do? [Ahab] goes after a white whale, obsessed. He ignores his crew. He ignores their safety. And, eventually, he gets impaled on the white whale. That’s the same thing Conlon does. He ignores his family, he ignores everything, and he impales himself on alcohol. At first I didn’t understand why he was listening to “Moby Dick,” but as we went along, I began to. You know, it’s a big book. I mean, I read it. It was a long read. Then, when he gets drunk, it’s not violence that comes out of him, it’s the problem.

A “Warrior” for a good cause

The upcoming action drama “Warrior” is the first truly major movie we can think of to cover the world of MMA. A poster from Comic-Con signed by stars Tom Hardy — who made such a huge splash as Eames in “Inception” and who is slated to be next Mad Max — and Joel Edgerton (outstanding in last year’s “Animal Kingdom“) from Comi-Con is currently up for auction at eBay. It’s all for an outstanding cause, the Elizabeth Glaser Pediatric AIDS Foundation, so you’ll be getting a small piece of history while helping children. However, the auction closes this afternoon (Thursday, 8/4), just a couple of hours, so there’s not much time. 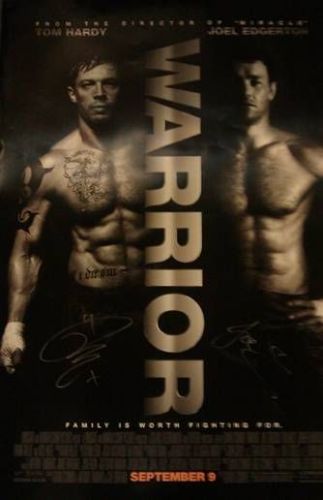