Hidden Netflix Gems – Everything Must Go

Hollywood has a rich history of well-known comic actors taking on more serious and weighty roles, from Robin Williams to Ben Stiller to Jim Carrey, and now Will Ferrell, in what is probably his very best performance to date. Everything Must Go bears a strong resemblance to Stiller’s work in Noah Baumbach‘s Greenberg, or Adam Sandler‘s in Paul Thomas Anderson‘s Punch-Drunk Love, in its portrayal of a flawed but basically good-hearted man going through difficult times and coming out better for it. The difference between Ferrell and Sandler, of course, is that Ferrell’s comedies generally don’t suck.

Ferrell plays Nick Halsey, an alcoholic who loses his job at the beginning of the film and, after an ill-advised revenge against his boss, Gary (Glenn Howerton), returns home to discover that his wife has left him. Not only that, she has locked him out of the house, frozen their joint bank account, and left all of his possessions out on the front lawn. Nick is understandably upset, and reacts in the defeated way that has apparently become his life’s standard recourse: he buys a lot of beer and camps out in his La-Z-Boy on the lawn for the night. In the morning, having exhausted his beer supply and unable to find his car keys, he borrows a bicycle from his twelve-year-old neighbor, Kenny Loftus (Christopher Jordan Wallace), and heads down to the convenience store for more beer while Kenny keeps an eye on his stuff.

END_OF_DOCUMENT_TOKEN_TO_BE_REPLACED 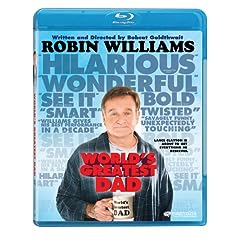 For all the buzz surrounding the film coming out of Sundance, you’d think “World’s Greatest Dad” was one of the funniest comedies of the year. Alas, it isn’t as great as many people made it out to be, but writer/director Bobcat Goldthwait’s sophomore effort is still a must-see for anyone who likes a little variety in their moviegoing diet. Robin Williams stars as Lance Clayton, a high school poetry teacher with dreams of becoming a published writer. Everything he’s ever written has been rejected up until now, so when his jackass son Kyle (Daryl Sabara) dies from auto-erotic asphyxiation, Lance is given the opportunity to exploit the tragic accident, as long as he can learn to live with himself for it. Though that may sound a little too dark to be considered a comedy, there are definitely laughs to be had – just not very many of them. In fact, the movie works better during its more dramatic moments thanks to Williams’ strong performance, and though you wouldn’t expect it to be so touching, “World’s Greatest Dad” is at its best when exploring the instictive love that a father has for his son.

“New Moon” rises while sinking; Thanksgiving box office gets hit on “The Blind Side”

My Wednesday prediction that this would be a healthy Thanksgiving weekend at the box office certainly proved true — and it was nice to see it wasn’t at the rest of the economy’s expense: holiday shopping actually went up slightly this year and went up a lot more virtually. Also, the movie everyone expected to hit number actually did one hit number one. However, looking beneath the surface just slightly, movie consumers were making some interesting choices.

The argument prognosticators were making last week was that Summit’s “The Twilight Saga: New Moon” pretty much had to come out on top because, considering its $142 million+ opening weekend, even if it suffered a catastrophic drop in its second weekend, it still would be ahead of everything else, and that’s pretty much what happened. The vampire-werewolf-human love triangle dropped a massive 70% but, as reported by Box Office Mojo‘s weekend chart and trade mag writers jolly Carl DiOrio and Pamela McClintock, it still earned an estimated $42.5. That was a mere $2.375 million ahead of this week’s surprise #2 film, “The Blind Side,” which not only actually won the box office race on Thanksgiving day (which is not included in the weekend tallies) but came refreshingly close to winning the weekend with $40.125 million. The five day total for the films offer a bit more air between the #1 and #2 spots, with an estimated $66 million for “New Moon” and just over $57.5 for “The Blind Side.”

The impressive aspect of the Sandra Bullock-led sports film/cross-cultural family drama combo is that it did something I don’t remember seeing whenever I’ve been paying close attention to grosses.  In a world where we think it’s good if a film drops less than 45-50% on its second weekend, “The Blind Side” actually climbed 17.6% on its second go-round without a significant expansion (it went from being in 3,310 theaters to 3,340). I haven’t seen the film but I will say that this seems to be a sign that it’s possible what attracts most audiences today isn’t so different from what attracted them 50 or 75 years ago.