END_OF_DOCUMENT_TOKEN_TO_BE_REPLACED

Well, depending on how long this takes.

* The Oscar voting deadline passed today and the big story ’round the town was on the punishment meted out to producer Nicolas Chartier, whose over-aggressive e-screeds against “Avatar,” and in favor of his own, “The Hurt Locker.” He’s banished from the ceremony. Still, as Nikki Finke reports, don’t feel too bad for him, if you feel bad at all, and I’m not sure why you should.

Wouldn’t it be nice — and naive — to think that stuff like this actually affected no one’s vote, in any direction?

* I like Tim Burton‘s work and dislike Timur Bekmambetov’s films, but the two nevertheless insist on working together to produce “Abraham Lincoln Vampire Hunter” based on the book by the author of the also soon to be filmed “Pride and Prejudice with Zombies.” The reportedly erratic but extremely talented writer-director David O. Russell, who infamously got into a scuffle with George Clooney over the treatment of extras while making 1999’s “Three Kings,” is “circling,” Mike Fleming says.

* Hef on Bogie. And, when you think about the Playboy mansions, almost everybody really does come to Hef’s, or wants to, anyway. 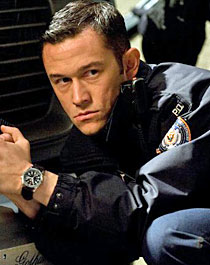 * James McAvoy leaves a “cancer comedy” for mysterious reasons and Joseph Gordon-Levitt jumps on board, reports THR‘s Gregg Kilday. McAvoy’s pretty good, but that still might be an improvement.

* Martin Scorsese is so busy these days I get tired just reading about him. Oh, and that gangster film with De Niro is starting to take shape, alongside at least three documentaries about Fran Lebowitz, George Harrison, and the history of British cinema, including much, I’m sure, about his old friend and mentor/influence, Michael Powell — the greatest director even many cinephiles barely know. Oh, and elsewhere he discusses the possibility of making films “like ‘Precious‘” in 3-D. I see his point about how the technology could theoretically be used to enhance intimate stories. I guess. Maybe.

* I meant to mention this days ago, but this lawsuit over the fictional destruction of the “Christ the Redeemer” statue in “2012” is based on the fact that the statue is covered by copyright — something one usually doesn’t think about for iconic statuary. In any case, I really just wanted an excuse to quote Matthew Belloni‘s opening to the story:

With apologies to the Coen brothers, Columbia Pictures is learning the hard way not to f— with the Jesus….