I’m not complaining, as we see John Cho and Kal Penn attend the premiere of “A Very Harold & Kumar 3D Christmas” at Grauman’s Chinese Theatre in Hollywood. But isn’t this a little early?

The movie should be fun as it has a good rating on Rotten Tomatoes. Jason Zingale agrees:

Following the disappointment of “Harold & Kumar Go to Guantanamo Bay,” not to mention co-star Kal Penn’s surprising decision to accept a job at the White House, the likelihood that fans would ever see another Harold & Kumar adventure again seemed pretty slim back in 2008. And yet here we are, three years later, discussing the newest film in the ongoing stoner buddy franchise. But while my expectations were relatively low going into “A Very Harold & Kumar 3D Christmas,” it’s actually a big improvement over the last sequel, hewing much closer to the spirit of the original film by refusing to take itself too seriously while still maintaining a certain level of tact that was sorely missing from the disastrous second installment.

I didn’t mind the second installment, but only because the characters are always fun. If the movie is better this time, this should be a crowd-pleaser.

The reviews are pretty mixed for “Anonymous,” the new drama that tells a story of how Shakespeare wasn’t the guy writing all those plays you had to read in high school. The critics on Rotten Tomatoes only give it a 43% positive rating as of today, though the readers liked it more.

Bullz-Eye’s David Medsker liked it and gave it 3 stars out of 5:

On the surface, “Anonymous” appears to be a radical departure for director Roland Emmerich, who has made his bones destroying the world by way of natural disaster and alien invasion. Look closer, though, and you’ll see that “Anonymous” boasts many of the same qualities of his action-driven work. It’s bombastic, needlessly complex, and about as historically accurate as “2012” or “The Day After Tomorrow” are scientifically accurate (which is to say, not very). As a work of historical fiction, though, it’s quite entertaining, and Emmerich coaxes some remarkable performances from his cast. It’s all a bit ridiculous, yes, but one should never let facts get in the way of a good story.

It’s hard to blame Dane Cook for making the most of his 15 minutes of fame – and boy did he, since it lasted more like five years – but one look at his IMDb profile will confirm that it’s finally over. This will likely please movie critics who hold the comic responsible for starring in some of the worst films of the last few years, because his latest rom-com, “My Best Friend’s Girl,” isn’t much better. The fledgling comic stars as Tank, a sort of anti-boyfriend who gets paid to take women on dates so terrible that they immediately run back to their former boyfriends. When Tank’s best friend Dustin (Jason Biggs) hires him to do the same thing with his new lady (Kate Hudson), however, Tank discovers that he actually has feelings for her. What follows is a series of events straight out of the Romantic Comedy Bible, and while the movie isn’t very funny, it’s never so bad that it’s unwatchable. I’m still not entirely sure what Alec Baldwin is doing in a movie like this (Dane Cook and Jason Biggs’ involvement makes sense, and even Kate Hudson has had some questionable taste in scripts lately), but at least he limits his time on screen to a handful of scenes. Bonus points to writer Jordan Cahan for coming up with the idea of a Bible-themed pizza joint named Cheesus Chrust. Now, if only someone actually had the balls to open one up.

What Else Ya Got? “The Dark Knight”

When you’re the highest grossing movie of the year, fans tend to expect a little more bang for their buck when it comes to the inevitable DVD and Blu-ray release. “The Dark Knight” is certainly loaded with an impressive collection of bonus material, but the lack of certain extras seems to hint that an ultimate edition is already in the works. You never know how long you’ll have to wait for that, though, which makes the two-disc release the perfect distraction until it does. With over three hours of bonus material and a digital copy to boot, it may not be the best Blu-ray of the year, but you could certainly do worse. 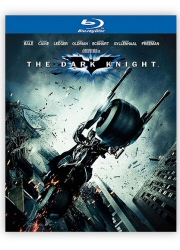 “Focus Points”
The Blu-ray version allows you to access this collection of 18 mini-featurettes as it pertains to the movie, but you’d be better off watching it all at once as a 64-minute making-of featurette. Among the topics discussed include the challenges (and advantages) of filming the opening sequence and Batmobile chase in IMAX, the design and creation of the new Bat-Suit and Bat-Pod, and the planning and execution of the hospital explosion and the super-cool semi-truck flip.

“Batman Tech”
A TV special that focuses on the history and practicality of Batman’s gadgets. Diehard fans probably already caught this when it first aired on TV, but those that didn’t will discover that the Caped Crusader is more based in reality than you might think.

“Batman Unmasked”
Another TV special that aired prior to the Blu-ray release, this one isn’t nearly as interesting as “Batman Tech,” but it still delivers a one-of-a-kind look into the psychology of Batman and his villains. The focus on the latter group is particularly cool as the interviewees discuss the similarities between Batman’s rogue’s gallery and real-life criminals and murderers.

“Gotham Tonight”
Undoubtedly the weakest of the set, this collection of fake news stories (including profiles of Bruce Wayne and Harvey Dent) doesn’t really work as well as it should. The acting is subpar and the stories themselves feel staged. Granted, that’s what you’d expect from fake news stories, but still.

“The Galleries”
Four excellent photo galleries including a variety of Joker cards, concept art, poster and production stills. Most of the Joker cards designed were clearly unusable, but it’s still cool too explore all the different styles they considered.

Overall, not a bad collection of extras for Warner’s first go-around with “The Dark Knight.” Any real collector knows that a much better version will likely be released next Christmas – and hopefully with more behind-the-scenes footage of Heath Ledger at work, not to mention make-up tests for both The Joker and Two-Face – but if you’re jonesing for another viewing of “The Dark Knight” before then, you can at least find comfort in the fact that the two-disc Blu-ray isn’t a complete waste of time.