Pamela Adlon gets back to “Californication,” bids adieu to “King of the Hill” 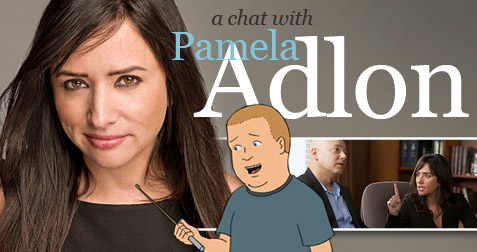 Unless you watch “Californication” — or were a fan of Showtime’s swiftly canceled “Lucky Louie” — you may not know Pamela Adlon’s face. If you’ve ever watched “King of the Hill,” however, you almost certainly know the sound of her voice, because she played the pudgy, slow-witted Bobby Hill during the Fox series’ long run, which comes to a close September 13.

Adlon is, of course, neither pudgy nor slow-witted — which made her great company for Bullz-Eye’s Will Harris during their recent chat. One major topic, naturally, was the long, bumpy road “King” traveled during its time on the airwaves:

For years, Fox moved us around. We weren’t even prime time. They would say, ‘Prime time starts at 8 PM,’ and we’d be on at 7:30. And they pushed us around so much that we were canceled four times before this. But we kept growing back up from the pavement, like a flower. It’s just a testament to the show itself and its writing that it’s survived this long.

With “Californication” kicking off its third season, Adlon’s work on that series was a source of conversation, too — although she couldn’t talk much about what’s going to transpire in the coming weeks. She did, however, get in depth about her character’s story arc in Season Two:

I had E-mailed Tom Kapinos before we started production for the second season, and I was, like, ‘Come on, give me a little taste! Let me know what’s going on!’ And he said, “I don’t know if you’re aware of this, but Marcy had a bit of a drug problem back in the ‘80s. And she gets into that again.’ And I went, ‘Oh…!’ I wrote him back and said, ‘Yes! Marcy had a thirsty little nose!

To read more of Adlon’s thoughts on “Californication” and “King of the Hill,” as well as her prolific career in voiceover work, click on the image above or follow this link!

This morning, Peter Rice, Fox’s Chairman of Entertainment, and Kevin Reilly, Fox’s President of Entertainment, sat down for their network’s executive session, and you will be unsurprised to learn that they were positively bombarded with questions about Paula Abdul’s departure from “American Idol.”

“Paula is the only member of ‘American Idol’ whose contract was up this year,” said Rice. “We have been talking to her about it for most of the season, and we very much wanted her to return. In the past few weeks, the negotiation came to a conclusion, we made an offer that was fair to Paula, a substantial raise on the money she made in past, but Paula decided not to return. It was not our choice. We wanted her to come back to the show.”

Rice admitted that, given the short amount of time since Abdul’s announcement of departure, they didn’t have any big announcements to make about what they’d be doing, aside from the fact that
they would be focusing on the auditioning process and that it was their intention to have guest judges at each audition.

“We are talking to people now, a couple are confirmed, and we are talking about dates with others,” said Rice. “It’s our intention to have the guest judges be female pop stars, female performers, female artists.” Minutes later, he acknowledged that they had indeed gotten commitments from two such judges already: Katy Perry and Victoria Beckham.

“Between now and January,” said Rice, “we will come up with a more permanent solution on what we’ll do,” but of the inevitable change in dynamic with a new judge, he admitted, “There’s something exciting about that.”

Seriously, though, isn’t there still a chance she could still be back in the “Idol” fold come January?

That’d be a “no,” according to Rice. He says that the negotiations have concluded and that Paula Abdul is not returning.

“The expectation and hope was that Paula would come back,” he reiterated. “I think that when her current agent made a statement to the press two weeks ago, we thought, ‘What if she doesn’t come back?’ But we had no contingency. There is going to be a change, and we have to look at it as a positive change now, an opportunity for the show, to bring a different energy to it.”

Reilly, who had let Rice run with the ball, did finally chime in and remind us that, ultimately, the show is about the contestants. But I don’t think anybody bought that for a second.

Okay, that’s enough about Paula, but there was one more “Idol” note that came up during the session: no matter what you may have heard, Fox is not paying Ryan Seacrest $15 million to host “American Idol.” Seacrest’s $15 million deal is with CKX, Inc., which encompasses much more than “American Idol.” His original contract for “AI” remains in place.

Frankly, there wasn’t much time left after all of the Paula Abdul questions were asked and answered, but somewhere in the midst of it all, a few more random facts did slip out:

* The renewal of “Dollhouse” for a second season was due to the die-hard Joss Whedon fans, but Reilly swears that “it didn’t factor in from a fear place. It was more from a positive place. Those fans were there every week, and they stuck with it in a way that a lot of television fans don’t.” Now that he’s worked out the hiccups in the show, the official mandate for Season 2 of “Dollhouse” is for Joss to keep doing what he does.

* The decision to air the pilot of “Glee” as a standalone episode several months before its formal series premiere was “a marketing stunt,” one that did better than they ever imagined. Rice admits that the show’s a bit unique. “It’s definitely not saccharine, but every episode ends in an uplifting manner,” he said, going on to describe the series variously as “upbeat,” “subversive,” “sweet,” “emotional,” and “aspirational.”

* And, lastly, there are currently no plans to air the final six episodes of “King of the Hill.” Nice one, Fox. The series was always treated like the bastard child of the Sunday night animated line-up, so way to keep it that way to the very end.

Stephen McPherson, President of ABC Entertainment, just emerged onto the stage – after having the Jonas Brothers as his opening act, no less – and offered up the following tidbits of information:

* McPherson wouldn’t commit to when or if the remaining episodes of “Dirty Sexy Money,” “Eli Stone,” and “Pushing Daisies” would air. Maybe this is just my perception, but his comments about his regret that they couldn’t give the producers enough time to wrap up their series properly made it sound like he was saying, “If we had, then we’d probably work a little harder to get them on the air, but since we didn’t…”

* As to the “Scrubs” ratings, he’s thrilled for Bill Lawrence and all the guys on the show. “It’s been great for us,” he said. “Another year…? It’d be tough without Zach (Braff), but Bill and I are talking about it.” The talks, however, would seem to be contingent on how the ratings continue to be, so if you’re watching, don’t stop!

* ABC is not going to be picking up “King of the Hill.”

* “Samantha Who?” has frustrated the network with its numbers, but they’re trying to figure out a second series to serve as a solid comedy block.

* The odds of “Life on Mars” returning for a second season seem to be slightly better than even money. McPherson admits that, as far as his ratings expectations for the series, “the bar is not very high,” given that they’ve always battled with getting ratings in the post-“Lost” timeslot.

* As for the end of “According to Jim,” McPherson thinks this is probably the final run, “but we should probably leave that open.”

* With “Private Practice,” he thinks they’ve “really found the show” this season. “I think we’ve really upped the stakes as far as the quality of the medical stories we’re telling,” he said. “We’re really pleased with the numbers.” 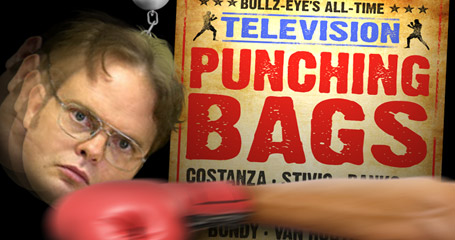 In nature, the weaker members of a species are often ostracized so they cannot reproduce and dilute the gene pool. Lions, for example, do not keep an omega male around to be the butt of the joke for the rest of the pride, like we humans tend to do. And while that makes sense in a Darwinian way, our way is a lot more fun. It may be cruel, but imagine how boring life would be if we lived in a world without the human equivalent of a punching bag. Admit it: you all know someone who fills this role in your life, and you relish it. You wouldn’t be human if you didn’t.

The world of television has a near-inverse proportion of punching bags as there are in nature, and this makes sense; it is much easier – and fun – for the writing staff to designate one character as the target for random acts of misfortune and malice, though not necessarily in that order. If you ever wondered why every show features at least one character that the other characters would likely never associate with in real life, now you know.

So bring us your sad, your weak, your insecure; your clueless, your obnoxious, your desperate, your slow-witted, and we will celebrate them for their inherent loserness. Get your boxing gloves on as we present to you Bullz-Eye’s all time favorite TV punching bags.