This review will appear on the very same day an African-American man will become President of the United States. While the media is constantly reminding us of the historic nature of that fact, what many younger readers may not realize is that only three and a half decades back, a man running on a more or less openly racist, and specifically anti-black, platform was a serious candidate for President — running in the very same Democratic party that would eventually nominate Barack Obama for the highest office on earth.

“George Wallace” is a savvy and darkly engrossing, if often slow and heavy handed, television biopic that takes a circuitous path in tracing the long career of the despised and beloved four-term Governor of Alabama and four-time Presidential candidate of various parties, George C. Wallace (Gary Sinise). We first meet Wallace in 1972 as the avid, middle-aged husband to a beautiful and very sexy young wife, Cornelia (Angelina Jolie). At the same time, a racist state trooper forces Archie (a “composite” character played by Clarence Williams III), a convicted killer and Wallace’s trusted African-America valet, to wear handcuffs at his mother’s funeral. 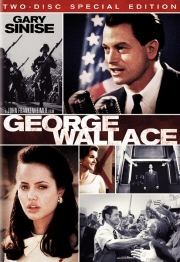 After his fateful encounter with four bullets that day, we meet Wallace again as the younger and far more liberal political protégé of anti-racist populist governor “Big Jim” Folsom (Joe Don Baker). Though Wallace is a skirt-chasing, semi-absentee father and husband to his steadfast wife, Lurleen (Mare Winningham), the real darkness only comes four year later when Wallace is defeated in his first gubernatorial bid by an opponent supported by the terrorist Ku Klux Klan. Seeing no alternative – losing an election is equivalent to losing his life – Wallace swears that he will “never be outn*ggered again.” He is true to his words and, within a matter of years he is the nation’s most notorious racist pol, blocking the doors of the University of Alabama rather than allowing a pair of black students to enter and “mix” with white students, and uttering his most quoted line: “…I say segregation now, segregation tomorrow, segregation forever.”

“George Wallace” is a look at history from the side of a well-deserved loser, and for those portions of the picture where director John Frankenheimer takes a dispassionate, even satirical (though deadly serious) approach, it is strong stuff and very much in line with the liberal director’s professional and personal legacy. A genius at creating smart political thrillers, and a participant in history himself as the man who drove Robert Kennedy to the Los Angeles hotel where he was assassinated, the director – never a grand-stander – allows himself to directly reference his own past via recreating one of his signature shots.

A key scene begins with Sinise/Wallace making a speech as a black and white monitor shows his TV version – a near identical view to the shot that introduces the McCarthy-esque Senator Iselin (James Gregory) in Frankenheimer’s 1962 masterpiece, “The Manchurian Candidate.” It’s not just stylistic messing around. Having sold his soul for political riches, George Wallace is a man in two halves. At times, he seems to be working hard to persuade himself that racism is correct and we’re never sure just how much he believes his own statements.

It takes time for Wallace to realize that the peaceful message of his bitter enemy, Martin Luther King, is far stronger than the cattle prods and water cannons of Alabama’s police departments, or the combined hate and fear of his state’s white majority. Actually, it takes a long time, plus a deadly church bombing claiming the lives of four innocent schoolgirls, plus a crippling bullet in the spine causing ongoing physical pain, plus the loss of two loving wives, before he can begin to admit he might have been wrong and begin to ask for forgiveness – and even then, no one is really sure of how much genuine remorse Wallace ever felt. (An uncomfortable interview with the real George Wallace in Spike Lee’s 1997 documentary, “4 Little Girls,” speaks directly to that point.)

As powerful as some sequences really are, a lot of things don’t really work in this Emmy and Golden Globe-winning telefilm. It would be tempting to blame all of the problems with “George Wallace” on the script by veteran TV scribe Paul Monash and George Wallace biographer Marshall Frady, but, though I might quibble about the need to create the character of Archie, it’s actually a good piece of work overall and the cast is for the most part sensationally good. It’s Frankenheimer’s directorial choices that occasionally fail. Most annoyingly, he clings excessively to Gary Chang’s florid score, ruining several scenes with unneeded and lackluster music.

The director also missteps in his decision to allow actor Clarence Williams III — a charismatic performer best known as Prince’s dad in “Purple Rain” and Linc of TV’s “The Mod Squad” — to portray his fictional valet as perpetually near tears of suppressed rage and remorse. Though Williams is superb, this choice renders the man as a stand-in for African-American anger, rather than as someone whom the governor might believably mistake as his Stephen Colbert-esque “black friend.” It’s harder to fault much relating to Sinise’s award-winning performance as Wallace, but at times he, too, is allowed to slink into excessive morbidity. (There’s also the matter of a bizarre and distracting continuity error regarding Wallace terrifying withered legs in a bathtub scene later in the film, followed quickly by a shot in which Sinise’s very normal legs are visible.)

However, it’s absolutely impossible to fault any choice made regarding the performances of the two female leads. Mare Winningham’s put-upon Lurleen Wallace is no plaster saint, but simply a very nice person deeply in love with a questionable man. And, not at all surprisingly, a perfectly cast 21 year-old Angelina Jolie steals all her scenes in just the right way as Wallace’s (mostly) devoted, fun loving, and highly-sexed second wife. The superstar-to-be lends a bit of much needed air to the film’s dour later scenes.

The supporting cast is also mostly a help, especially Joe Don Baker as the larger than life, slightly corrupt, Big Jim. Later on in the story, Baker performs a terrifying emotional 180 as, ill and broke, he begins a scene begging for a raise in his ex-governor’s pension, and then with the slightest prompting launches into excessively, but fully justified, rage at how Wallace has abused his responsibility by playing on the very worst in his supporters. It’s a brief tour de force from an underrated actor.

Also, while it’s not really a big part, fans of “Deadwood” will get a kick out of William Sanderson as faintly sleazy Wallace “kitchen cabinet” member T.Y. Odum – not a million miles a way from the similarly monikered, similarly obsequious, hotelier, E.B. Farnum. (I shouldn’t even mention it, but fans of another kind of viewing entirely will spot Ron Jeremy making the briefest of appearances as a pro-Wallace Boston hardhat.)

All in all, “George Wallace” might be a too portentous for its own good, but it is still a solid, worthwhile historical entertainment. It was also the start of a late career renaissance for Frankenheimer (his next project was the acclaimed action picture, “Ronin”). For the long time director with the well-known liberal and humanistic values and a special skill at portraying righteous indignation, it’s an apt return to the concerns that drove one of the most singular and skilled directors in Hollywood history. It’s also a sobering reminder of just how long it has taken for the United States to merely start to put its long history of bloody racial injustice behind it.

Sadly, the film’s two-disc release only contains one extra: the 20-minute video short, “Vision and Conflict: Collaborating on the Wallace Saga,” which combines interviews with Frankenheimer (who died unexpectedly in 2002) with “making of” material from the original production and new interviews with Gary Sinise, Angelina Jolie, Mare Winningham, the director’s wife, Evans Frankenheimer, and others. The video combines some interesting glimpses of the filmmaker’s at times combative working style, with some very nice reminiscences from the stars, all of whom seem to have developed surprisingly close attachments to the late, underrated director.

Intriguingly, the right-leaning Sinise was on the verge of the forming a production company with Frankenheimer, which could have resulted in some interesting films, or at least some good arguments. And for everyone who has suffered through one or more of Frankenheimer’s less acclaimed films — I’ve managed to miss most of them, somehow — it ends with a very wise statement from Frankenheimer: “Sometimes the movie god smiles on you, and sometimes the movie god defecates on you, and when the movie god defecates on you, there’s very little you can except try and get out of the way.”