END_OF_DOCUMENT_TOKEN_TO_BE_REPLACED

Celluloid Heroes: The 10 Funniest Lines of the ’00s

It takes a lot to make me laugh out loud at something a person says. Witty is one thing, but genuinely funny is another beast altogether. And when I say laugh out loud, I’m talking about involuntary spasms of laughter, the kind that take a couple of minutes to subside. There is no formula for it, and I have no criteria for what form it takes. I just know it when it see it. Unfortunately, I don’t see it often enough. Sometimes they appear in otherwise unfunny movies, at which point I usually get angry, but that’s a subject for another day.

In the first of a long list of decade-oriented blog posts about the movies of the 2000s, here are the lines that made me laugh the hardest at the Googoplex. Be advised, potential SPOILERS abound here, so I don’t want to hear that I ruined such and such movie for you. What are your favorite lines? Let’s hear ’em in the comment section.

#10: Up – Somebody always loves you
This is more of a laughter-through-tears kind of thing, but it’s my list, my rules, so it counts. Pete Docter goes straight for the heart in this movie, almost mercilessly so. The “married life” sequence makes me cry like a little girl every time I watch it, and this scene, where the loyal Dug comes to comfort Carl, is quite possibly the “Awwwwwww” moment of the decade.

END_OF_DOCUMENT_TOKEN_TO_BE_REPLACED

What Else Ya Got? “Get Smart” 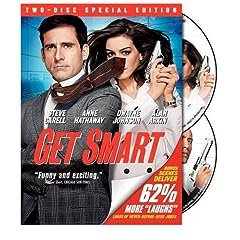 Welcome to a new installment we like to call “What Else Ya Got?” The market of home video is about much, much more than just owning your favorite movie these days; if a studio skimps on the bonus features – “What do you mean Alfred Hitchcock wasn’t available to do an audio commentary?” – some view it as nothing short of ripping off the customer, as if owning the movie were suddenly beside the point. We find this phenomenon amusing, but we also understand it; it’s what kept this writer from running out to buy either “Kill Bill” movie when they were released. Years later, he’s still waiting for the combo set that features Quentin Tarantino’s cut of both volumes together.

Our inaugural subject for What Else Ya Got? is “Get Smart,” Peter Segal’s high-octane reboot of Maxwell Smart’s Agent 86. Let’s get to it, shall we?

Disc One
There are two versions of the movie; the theatrical release, and the “Get Smart Takes” version, which has over 20 minutes of added jokes, alternate takes, etc. When a guy like Steve Carell is your lead, there is surely some comedy gold on the cutting room floor, so it makes sense that they would include a feature like this. The problem is that the only way of seeing these features is to watch the entire movie, meaning you’ll need two hours and ten minutes to watch 20 minutes of funny. Why they didn’t include the alternate jokes as a stand-alone piece is a mystery.

Disc Two
“The Right Agent for the Job”
This is a making-of featurette featuring interviews with Carell, Anne Hathaway, Dwayne Johnson director Segal and the movie’s producers, and includes screen tests between Carell and Hathaway, where they realized that the two had incredible chemistry.

“Man in Moscow”
A quick featurette about shooting in Red Square, which features Hathaway again sparring deftly with Carell.

“Spying on Get Smart’s Bruce and Lloyd Out of Control”
Shameless plug for the straight-to-DVD release featuring Masi Oka and Nate Torrence, the gadget makers at CONTROL. But hey, the movie also features the lovely Jayma Mays, so perhaps it’s worth a look.

There is also a digital copy of the movie on Disc Two.

That’s it, kids. We’ll see you soon, covering something other than “Meet Dave,” which has one, count it, one featurette. And a lame one at that. But hey, can you blame them? The movie stunk on ice, and made about six bucks at the box office.