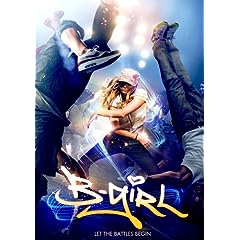 As I settled in to watch “B-Girl,” a film described on the back of its DVD box as originating “from the dancers of ‘Fame,’ ‘How She Move,’ ‘Step Up,’ ‘Step Up 2,’ & ‘Step Up 3D,'” I was reminded of a nine-word phrase of total disclosure which Roger Ebert once used to open a review: “I am not the person to review this movie.” Granted, he was speaking of “Scooby Doo” at the time, but his lack of familiarity with the mythos of that famed mystery-solving mutt have nothing on my deficiency of dance-movie knowledge. Still, I grew up in the ’80s, when breakdancing was in its original heyday, so I figured, okay, the least I can do is give this movie a chance. Sadly, “B-Girl” can’t hold a candle to “Breakin’ 2: Electric Boogaloo.” (Really, though, how many films can?)

“B-Girl” offers an all-too-familiar underdog story: Angel (Jules Urich, “You Got Served,” “Step Up 2”) dances her ass off while cruising the streets of NYC, but when a tragedy occurs in Angel’s life and results in both a shoulder injury and a decision by her mother to move to the other side of the country, she realizes that her only solace in California will come from getting back into shape and onto the dance floor again. The film is an expanded version of a short film bearing the same title, which was released in 2004 and also starred Urich, but that was five years ago; even in a world where we’ve been accepting twentysomethings playing teenagers since the original “Beverly Hills 90210,” no one in their right mind is going to look at Urich and say, “Okay, I’ll buy that she’s young enough to still be under her mother’s thumb.” It must also be said that neither the dialogue nor the acting is all that. This, of course, only leaves the dancing as a reason to see “B-Girl.” Is it enough? Well, this is where I’m going to more or less fall back on the aforementioned Ebert-ism, but for what it’s worth, I was impressed. For you B-Girls and B-Boys amongst our readership, though, you’ll probably have to see it for yourself.

What Else Ya Got? “The Hangover”

One of the biggest box office hits of the year, “The Hangover” finally comes to Blu-ray and DVD just in time for the holidays boasting a theatrical and unrated cut of the film (for once, you don’t have to choose between the two) and a slew of extras that are fun to watch once, but aren’t necessarily as good as you would expect.

The highlight of most Blu-ray releases is typically the audio commentary, and though this track featuring director Todd Phillips and co-stars Bradley Cooper, Ed Helms and Zach Galifianakis doesn’t start out strong, it gets better over time as they discuss everything from the music to Helms’ fake tooth to the different babies used during production. The picture-in-picture video doesn’t exactly, though, help because everyone involved looks positively bored (or just trying to enjoy the movie, you decide), so it can hardly be viewed as an incentive for Blu-ray owners.

This interactive feature lets you retrace the guys’ crazy night by visiting all of the locations they hit up along the way. From Caesar’s and the Riviera to Mike Tyson’s house, every stop includes interviews with the cast and footage of on-set antics. Tyson himself even gets a chance to shine with a great comeback on director Phillips.

“The Madness of Ken Jeong”

I’m not exactly sure why we needed eight minutes of Ken Jeong improvising, but this series of deleted scenes/alternate takes shows how he created the character of Mr. Chow through some experimenting.

END_OF_DOCUMENT_TOKEN_TO_BE_REPLACED