END_OF_DOCUMENT_TOKEN_TO_BE_REPLACED

No surprises in tame weekend box office: “The Other Guys” hits #1

Just as was predicted by nearly everyone as the weekend began, Will Ferrell — with a little help from a few other A and A- listers and broad critical agreement that the movie is no classic but is, in fact, funny — is back on top of the nation’s box office with a very healthy estimated take of $35.6 million for “The Other Guys.” That number from Box Office Mojo is exactly .6 north of the higher end of what was predicted previously by most prognosticators. It’s also a healthy chunk of what Nikki Finke says was a $90 million budget for the very broad action-comedy directed by Ferrell cohort Adam McKay. Ferrell and company also seem to be doing a good job of holding on to their core audience of young males. Considering that Ferrell’s been on top for a while now, you might expect his audience to be aging with him but, as the song says about the young at heart, fairy tales can come true.

Also, as Anthony d’Allesandro reminds us, Sony must be young at heart as well as they seem to having a consistently strong summer. Personally, I’d like to think there’s a bit of Louis B. Mayer mojo still lingering at the company’s Culver City grounds, which belonged to MGM until the mid-eighties. It is important to remember that Ferrell is, however, not a huge draw internationally, probably because a lot of his humor is verbal and plays off quirks of North American culture that might be obscure elsewhere. I mean, what is a Singaporean or Austrian to make of “Stay classy, San Diego!”?

#2 was, of course, “Inception,” which finally left the top spot in week 4 and dropped a modest 32.3% in its fifth weekend. The science fiction caper earned a tidy $18.6 million, which gets it to over $227.7 million so far, or thereabouts and, I’d say, well on its way to the $300 million mark. My skepticism that “Step Up 3D” could exceed earnings over the prior two films in the series was well earned. However, it did sufficiently well for Summit and Disney, hitting the better side of studio projections, Allesandro says, with an estimated $15.5 million. Apparently, given the mixed critical consensus cited, which is practically a rave for this kind of a tween-skiewing film, it doesn’t suck nearly as much as it could have, and that probably helps. Indeed, many of the critics are citing the dance numbers strongly enough to attract my curiosity. (I’m a sucker for a good dance number — emphasis on “good.”)

Moving down the charts,  Sony’s “Salt” continued to hold decently at an estimate of $11.1 million. Last weekend’s #2 picture, Paramount/Dreamworks’ “Dinner for Schmucks,” had a rather large drop of over 55% percent in it’s second weekend, dropping three places to the #5 spot. In a funny way, while few are arguing it’s particularly great, this film really seems to be dividing people over the question of whether it’s funny or unfunny, mean or nice. (David Medsker came down on the negative side, I came down on the positive — and I’m usually the tough-guy around here.)

Still, things are looking fairly rosy for Steve Carrel as he seamlessly transitions from television to movie star. His other hit comedy, albeit one only featuring his heavily accented voice, “Despicable Me,” is now at over $209 million and was very inexpensive by CG animation standards with only a $69 million budget. That must be music to the ears of the folks over at Universal, who really needed a hit.

As for limited releases, there’s actually too much interesting stuff happening for me to go into. However, as one might have guessed, Joel Schumacher’s “12” did the worst business of anything. In the critic-driven world of the arthouse, Mr. Schumacher has the cards seriously stacked against and this one was getting some of the worst reviews of his career, which is saying something. As always, you can read a lot more about it and many vastly better received movies over at Indiewire. Also, I had to look hard to find out how “Middle Men” did. Suffice it to say that, while I had mixed feelings about the movie, I think it deserved better and the folks at Paramount have been awfully nice to us on this film, which shouldn’t make a difference in how I root, but I’m human and it kind of does. At least, it beat the crap out of “12.”

Jay Fernandez doesn’t appear to be entirely wowed by this trailer. He admit it’s funny but feels it lacks enough of a plot description and “character delineation.” I say, that’s what movies are supposed to be for.

In any case, I guess have a soft spot for the species of dumb/smart comedy practiced by Will Ferrell and his comedy life-partner Adam McKay. This time, the rather clever idea for yet another buddy cop spoof features Samuel L. Jackson and Dwayne Johnson as a pair of super-competent supercops and Ferrell and Mark Wahlberg as, yes, vastly less competent and less super cops. Not every joke lands, but hang on for the bad cop/bad cop scene with Steve Coogan and the explosion at the end.

A Chat with Rob Riggle

Given how long Rob Riggle has been doing stand-up, it’s actually kind of funny to think that there are lot of folks who don’t even know that he does stand-up. Then again, given that he’s been on “Saturday Night Live” and “The Daily Show,” as well as in “Talledega Nights” and “The Hangover,” it’s not like you can’t understand why some people only know him for his TV and movie work. On March 5th, however, Riggle will be taking the stage once more for an episode of “Comedy Central Presents,” where he’ll be giving viewers 22 solid minutes of stand-up. I had a chance to chat with him about the special, as well as his work on “SNL,” his two and a half year stint as John Oliver’s officemate, and some of his upcoming film projects.

Rob Riggle: Hey, Will! How are you doing?

BE: Pretty good. Well, welcome back to the stand-up scene on Comedy Central!

RR: I know! I’m excited! Very excited…and I haven’t even seen it yet!

BE: It’s very good. I caught it on the online screening room.

RR: Oh, well, thank you. I’m glad to hear that. I’ve literally only seen a couple of clips, so that’s good. You never know how those things go, because I think I did, like, 34 minutes, and they cut it down to 22, so you’re, like, “Uh, okay, I hope it’s good.” I’ll be very interested to see what they cut!

BE: I can only presume that the 10 minutes they cut were the slowest minutes. (Laughs) So how often do you even get to do stand-up? Because you’ve certainly got plenty of acting keeping you busy.

RR: Yeah, well, actually, I’ve been very lucky with the acting, but I try to get out as often as I can…which, in my humble opinion, is not often enough. But I book gigs whenever I can, and to answer your question directly…I dunno, I’d say probably two times a month. At least right now. There was a time where I was a lot more consistent. It just depends on the work schedule, y’know? If there’s a gap, I’ll get out there and pound it out three or four times a week, but it just depends on my work schedule, that’s all.

BE: So are you forever honing material, just in case you might have a free night for a gig?

RR: Yeah, that’s the constant work, I guess. I’m constantly waking up in the middle of the night and jotting down notes, and I have a stack of notes and thoughts and premises that I am dying to explore… (Laughs) …and I hope to have the time work them out, but I just haven’t been able to get to them yet. But one of these days I will, and hopefully I’ll be able to develop a new set. That’s what everybody’s got to do.

BE: So what was the case with this Comedy Central special? Was it planned out well in advance, or did you just get a last-second phone call saying, “Hey, Rob, come on back to the family”?

RR: No, y’know, I was just very fortunate that they came and saw me do stand-up at…I think it was right there in New York, at Comics Comedy Club. I was doing a weekend there and they came down, saw me, liked what they saw, and asked if I wanted to do it. And I was flattered. I was, like, “Yeah! Count me in!” So that’s how it all came about. And, y’know, I love Comedy Central. The people over there are awesome, and I have a good relationship with them, so…it’s all good.

BE: Well, in particular, the routine during the special that hit home for me was the bit about men’s rooms in stadiums.

END_OF_DOCUMENT_TOKEN_TO_BE_REPLACED 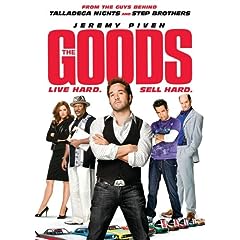 You know that a movie isn’t very good when the studio comes running to you with an interview opportunity after opening weekend (speaking of which, check out Will Harris’ chat with producer Adam McKay), but although “The Goods” may not be very funny, it’s still a better-than-expected comedy thanks to its ensemble cast. Jeremy Piven stars as Don Ready, a smooth-talking car salesman who’s made a living by conning his way to the next big sale. But when his traveling team of liquidating specialists (including Ving Rhames, David Koechner and Kathryn Hahn) is hired to save a flailing dealership by selling every car on the lot, Don discovers that the job might be too big even for him. Though the idea is ripe for some pretty funny material, the story feels a little too safe compared to the crude humor that appears throughout. Thankfully, director Neal Brennan is completely unforgiving of the film’s vulgar tone, and it ends up working to its benefit. Piven’s confident, fast-talking schtick is tailor-made for the lead role, but it’s character actors likes Ken Jeong, Rob Riggle (playing a 10-year-old boy with a pituitary disorder), and Craig Robinson who end up stealing the show. “The Goods” isn’t for everyone, but for fans of the comedians involved, it’s probably worth checking out.