This Weekend at the Movies: Transform Your 4th of July, Hanks Style

There are big weekends, and then there are MASSIVE weekends. The release of a new Michael Bay movie, the third film in the TRANSFORMERS franchise at that, makes this a gigantic weekend. But if robots aren’t up your alley, maybe Tom Hanks is. If not them, perhaps Selena Gomez. If none of those, screw you!

Transformers: Dark of the Moon

When director Michael Bay was out stumping for the first Transformers film, he said that he’d love to make a small, character-driven film, just for a change of pace, but that he can’t help but make these huge gigantic movies because he’s afraid they’ll just stop making them. And while that seems absolutely insane with summer blockbusters trying to outdo each other year after year, there doesn’t seem to be any bigger movie this summer than Transformers: Dark of the Moon. Sporting a relatively modest Rotten Tomatoes score of 36% (the first scored 57, the second a mere 20), reviews tend to be on the side of “it’s fun, sure, but c’mon, robots?” Though even the negative reviews mostly note that the climax – a nearly hour-long rampage through downtown Chicago – is staggering to behold. And in 3D. In a relatively modest summer at the box office, with few breakaway hits, this could be one of the few huge ones.

I was always disappointed that Tom Hanks didn’t direct another movie after That Thing You Do, one of the most assured directorial debuts and a very fine music film that also, miraculously, gave us one of the greatest pop songs of all time. And while Larry Crowne is kind of taking a beating in the press, scoring lower than Dark of the Moon on Rotten Tomatoes, I know I’m not the only one perfectly happy to head out for a new Tom Hanks movie. This one concerns a middle-aged man (Hanks) who, after getting fired from his job for having never gone to college (which seems like a bad reason to fire somebody, but I guess we’ll see), sets out to do just that. And maybe kiss Julia Roberts in the process. MAYBE. 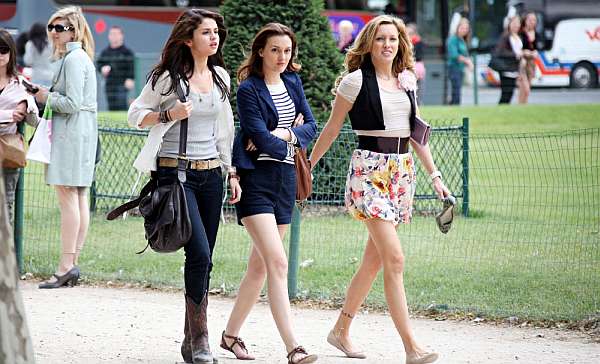 In a plot that could ALMOST be a screwball comedy, Selena Gomez is mistaken for an heiress and taken on a whirlwind tour of, you guessed it, Monte Carlo. The difference is that Selena Gomez plays two roles. And that the movie also provides a launching pad for a new hit single. Claudette Colbert would have none of that. NONE OF THAT.

Stay tuned next week for an ensemble comedy with a great cast, and a family “comedy” with Kevin James.

END_OF_DOCUMENT_TOKEN_TO_BE_REPLACED

This Weekend at the Movies: Still Not a Bummer Summer

Whether you’ve got kids, you still feel like a kid inside, or some combination of the two, this weekend has you covered.

Super 8 is undoubtedly the big movie of the weekend, though many have called into question its ability to draw in audiences. With word still going strong on X-Men: First Class, and no classic selling points to attach to Super 8, the mutants may take another weekend at the #1 spot. Word has been pretty strong in Super 8‘s favor, and the fact that it’s already seeing a backlash in critical circles is a good sign that it’ll register with audiences. Plus, awareness is out there, even if it’s not as high as Paramount would like – people camped out for as long as eleven hours to see the film at a sneak peak in Hollywood last night. Will the film’s obvious bid for early 80s nostalgia be enough? Hey, it worked for Transformers…

Hit the jump for more.

END_OF_DOCUMENT_TOKEN_TO_BE_REPLACED

I’d be inclined to declare this whole weekend a massive multiplex fail if it weren’t for the fact that the only major release is actually getting really great reviews. And if you’re looking for something a little more low-key, this weekend is absolutely booming with opportunities provided you live in New York or Los Angeles. So onward we press into summer!

Aside from its surprising ability to draw in very talented actors (its cast includes James McAvoy, Michael Fassbender, Jennifer Lawrence, Kevin Bacon, Oliver Platt, and January Jones), my hopes for this film were unfathomably low until a couple of weeks ago, when word got out that Matthew Vaughn’s fourth feature (he previously directed Layer Cake, Stardust, and Kick-Ass) was actually really, really good. I don’t know why it surprised me so; after all, I liked all of his films to varying degrees, but it seems like, at least this once, a film slipped through the famously rigorous Fox development process. Currently boasting an 87% on Rotten Tomatoes, which is better than any superhero movie has faired since the 2008 one-two-three punch of Iron Man, Hellboy II, and The Dark Knight, X-Men: First Class is poised to make a big dent this weekend both culturally and financially. I’ll be wading through the masses tomorrow to find out for myself how it holds up. Join me!

Hit the jump to see what else is coming out this weekend in limited release, including one of my favorite films of the year thus far.

END_OF_DOCUMENT_TOKEN_TO_BE_REPLACED