“Shrek Forever After” to live up to its name?

Quite possibly, if three weeks constitutes “forever.” The final installment of the CGI animation series was considered a fairly major disappointment in its first week, earning a relatively anemic amount just under $71 million, tens of millions less than prior entries. However,  “Shrek Forever After” has shown decent staying power, indicating that the relatively strong reviews this time around might be reflective of something that actually matters to audiences. If we are to believe jolly Carl DiOrio, it is once again the probable box office champion. Indeed, DiOrio expects the grosses to be between $25 and $30 million, which could easily double almost all of the four, count ’em, four major new releases coming out this week, assuming his lowish guesses for the other films are right.

To a lesser extent, the second week of the widely hated “Sex and the City 2” is also a contender for third place according to DiOrio — in his video, he doesn’t mention it in writing — but the Numbers see things quite a bit differently. I’d personally expect a bigger than average drop-off from it’s unimpressive debut simply because I get the feeling that hardly anyone liked it much, perhaps not even the franchise’s biggest fans.

Now, I’m writing this quite late at night (or early) and I’m not really in the mood to go into one my usual detail explications of all four new major releases, but we do have quite an assortment which I guess will fragment the market a bit. Suffice it to say Uncle Carl expects them all to come in the teens, mostly the mid to lower with the Numbers being generally more optimistic for all newcomers. 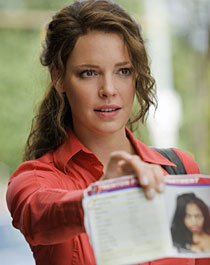 Next up in terms of fiscal expectation I gather is, Lord help us all, the CGI-assisted talking dog movie “Marmaduke” — yes, that Marmaduke, the dog from the unfunny comic strip — which I suppose is supposed to ride the crest of family appeal to a decent showing for Fox. This is a movie that might appeal to small children, but I have to wonder if it’ll have any allure whatsoever to a single human over seven. I’m skeptical of the hopes for this one, though the forbearance of parents should never be underestimated.  It’s PG-rated, by the way, which means its either full of annoying scatological humor or the G-rating is entirely a thing of the past. In any case, it’s reviews are most certainly in the toilet. I don’t think they’ll harm it — I think the very idea of a “Marmaduke” movie will, however.

Faring far better critically are the films expected to, naturally, do least well of the bunch. “Get Him to the Greek” is very much on my mind as I’ve just finished a way long interview piece about it below this post. I think that I and our reviewer on this one, David Medsker, mostly agree, though I was less disappointed by its admittedly counter-intuitive final act. It’s a flawed but winning and, at times, utterly brilliant comedy from director Nicholas Stoller and the Apatow specialists in R-rated comedy.

It reteams Russell Brand and Jonah Hill from Stoller’s outstanding “Forgetting Sarah Marshall” — though Hill is playing a different character and the marketing is not playing up it’s spin-off status too obsessively. It’s doing quite well with critics, who are probably as starved for a decent comedy as everyone else. Some are even comparing it to last year’s super-sleeper, “The Hangover.” Universal most surely could use that kind of a hit, but it feels to me like less of a home-run and more of a decent single or a double that will probably do quite well over the years on home video.

Finally, since “Splice” from Warner Brothers and Joel Silver looks like a reasonably intelligent science-fiction monster horror flick low on gore but reasonably heavy in other kinds of thrills and chills, and a fairly obvious spin on the “Frankenstein” myth, it’s expected to do the least well. The original buzz was strong but now it seems to be getting mostly decent, but pretty far from ecstatic, reviews. In any case, since today’s horror fans expect a movie to induce PTSD, whatever success it has will have to be from sci-fi fans and old fogeys who actually enjoy watching the original “Frankenstein” movies. It would be fun to be surprised for a change. Maybe it’s R-rating, largely for language and sexuality, will fool them.