* Speaking of Anne Thompson, I saw “Iron Man 2” at the press junket screening last week (a last minute reschedule to L.A. from London, on account of the Icelandic volcanic eruption, I was told). I’m supposedly embargoed from saying anything more than that, but it certainly hasn’t stopped Ms. Thompson from venturing an opinion and summarizing what might be the general critical reaction. Let’s just say I did not fall down in a dead faint at reading her thoughts.

* Director Doug Liman is the latest to circle the Coen Brother’s script for an adaptation of the fun Michael Caine/Shirley MacLaine 1960s caper flick, “Gambit.”

* He’s a gay vegetarian polymath, he painted the Mona Lisa, he inspired a huge best-seller about Jesus having kids, he has an enormous beard, and now he’s ready to kick some renaissance ass!

* Paramount wants to make a film of the Mattel-owned toy perennial, the Magic 8 Ball. Contacted for comment, the legendary children’s oracle said: “Outlook not so good.”

* Topher Grace and Richard Gere are both somewhat underrated performers these days. I like the sound of the sound of this spy thriller featuring the pair. At least writer-director Michael Brandt seems to know which movies to steal from.

* Dennis Cozzalio has some great posters and pics from the TCM fest. Much more from him to follow.

* Another one of the more interesting and ubiquitous cinephile bloggers is taking a break, but for how long? 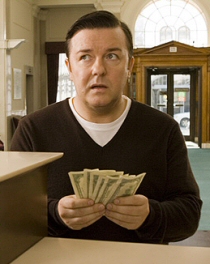 * The 2010 show wasn’t so great and it was probably the least funny I’ve ever seen the great Ricky Gervais be, but nevertheless he has been asked back to host the Golden Globes next year:

“I can’t believe they invited me back after awful things I said,” said Gervais. “Let’s see how far I can go this time.”