Who says persistence doesn’t pay off? 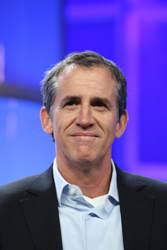 On Sunday, I spoke with John Landgraf, FX’s President and General Manager, to get the latest update on the network’s attempts to transition Brian Michael Bendis’s “Powers” from comic book to the small screen. Not only did he confirm that the pilot was indeed still in the works, he also let slip that Bendis was now collaborating with an outside writer, describing this other individual as “a really, really good writer who got really excited about the project. The new writer and Brian have got a good take on it. They came in about two months ago and pitched what they were doing, and it was great.” What Landgraf did not tell me was the name of this writer, as he wasn’t sure if he was allowed to release the information yet, but he assured me that he would get in touch with me once he could.

Well, he just did…and, frankly, I couldn’t be much more excited about it. Bendis’s collaborator is none other than Kevin Falls, the man behind NBC’s late, great “Journeyman.” Given how well Falls kept the mythos and storylines of “Journeyman” weaving in and out, he seems like an excellent pick to work on such a complex series as “Powers” is likely to be. I’ve already dropped a line to Mr. Falls’ folks, in hopes of chatting with him about the gig, so keep your fingers crossed just as tightly this time as you did last time. (It worked pretty well, after all.)

What say you? Are you as jazzed as I am…?