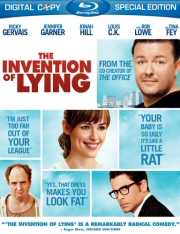 There are five deleted scenes in all. None are exactly essential, but there’s still some good stuff here, including two trailers for the in-movie films, “The Invention of the Fork” and “Numbers,” and two bits with Louis C.K. The best of the bunch, however, is a rather lengthy conversation between Gervais and Jennifer Garner that takes place on the way to their first date. If the same material wasn’t already covered later in the story, it probably wouldn’t have been cut, because Garner is great in the scene.

These four video podcasts don’t really have anything to do with the film, but fans of Gervais will probably enjoy them regardless. Along with a mock episode of “Cribs,” the videos also find Ricky pretending to scout for office locations, reading a local newspaper article about the film’s production, and terrorizing a PA with Nerf guns.

Five minutes of on-set antics, including ruined takes from Gervais’ laughter and more Nerf gun footage. It’s too bad many of these were already ruined in the “making-of” featurette, because this is definitely one of the better gag reels in some time.

All in all, not a bad collection of bonus material, but it would have been nice if Warner Bros. had made one or two of these exclusive to Blu-ray owners. As it stands, there’s really no reason to buy the hi-def version unless you’re an HD junkie. Save the cash and just pick up the DVD instead.