Star Trek: The Motion Pictures – The Cinematic Voyages of the Starship Enterprise

The new “Star Trek” movie is almost here, my friends, and the excitement is palpable. What has J.J. Abrams done to Kirk and company, and will his efforts live up to the high expectations of the notoriously-picky “Trek” fans? We’ll all know the answer on May 8th, but in the meantime, the anticipation has led many to take a step back and revisit the previous films in the franchise…which, as it happens, is exactly what yours truly has done. In addition to the motion pictures, your trusty Bullz-Eye contributor has also gone back and re-read the novelizations for each film, and you might be surprised to find just how much good stuff never actually made it past the printed page…even if it probably should have.

Check out the piece by clicking right here…or, of course, you could click on the big ol’ graphic directly below.

Just in case you’re still on the fence about clicking over, here’s an excerpt from the feature to give you an idea what to expect… 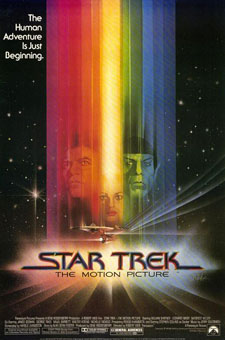 Storyline: When an alien force of inconceivable power sets its sights on Earth, Admiral James T. Kirk emerges from retirement, swipes the refurbished U.S.S. Enterprise from its new commander, Willard Decker, and sets off to save the planet. Spock, who had left Starfleet in favor of purging his emotions on his home planet of Vulcan, decides that the answers to his spiritual quest may be found with this alien and rejoins his former crewmates. Oh, and there’s also this bald chick…
Villain: V’ger. That’s short for Voyager 6, a space probe launched from Earth way back yonder in the 20th century. The probe was found by an alien race of living machines that interpreted its programming as instructions to learn all that can be learned, and return that information to its creator. Unfortunately, it can’t imagine that its creator can possibly be a “carbon unit,” a skepticism which proves highly problematic for the human race.
What’s good: At the time of its release, the best part was simply seeing the cast together again for the first time since the series’ cancellation, and having a noticeably bigger budget to work with. Nowadays, however, the film is driven by the interaction between the eternal trifecta of Kirk, Spock, and McCoy, whether it’s Spock’s pure logic battling against McCoy’s emotions or Kirk’s inability to accept that Decker might actually know something that he doesn’t.
What’s bad: ven Robert Wise’s Director’s Cut of the film still contains some seriously interminable shots, most notably as Admiral Kirk sees the refurbished Enterprise for the first time. There’s a reason my friend Donnie found it more interesting to count the tiles on the movie theater ceiling than watch the film…but, then, he always was more of a “Star Wars” guy. “Trek” fans, meanwhile, have long groused – and rightfully so – that the first big-screen adventure for Kirk and company was, at its heart, little more than an expanded version of an original episode, “The Changeling.” 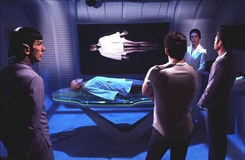 Most surprising cast member: Stephen Collins as Commander Willard Decker. Collins went on to starring roles in “Tales of the Gold Monkey” and “Tattinger’s,” then followed it up with a recurring role on “Sisters,” but his most memorable role is almost certainly that of Rev. Eric Camden, the patriarch on “7th Heaven.”
“Yeah, but the book was better.” – The novelization of “Star Trek: The Motion Picture” was actually written by “Trek” creator Gene Roddenberry, and it provides several details which, though they aren’t actually in the movie itself, have nonetheless become accepted as fact throughout the “Trek” universe. Most notable is that the character of Willard Decker is actually the son of the late Captain Matt Decker, from “The Doomsday Machine,” an episode of the original series. One that hasn’t taken off, however, is the suggestion that Kirk had a significant romantic relationship with a woman named Lori Ciani during the so-called “lost years” between the series and the movie. Oh, and you really need to read the book’s footnotes. Roddenberry treats the novel like it’s a historical record, and when Spock refers to Kirk as his “t’hy’la,” a Vulcan word which apparently can mean either “brother” or “lover,” it results in a response from Kirk that has spawned one hell of a website.

Now are you tempted? C’mon, just click right here. Go on, you know you want to…