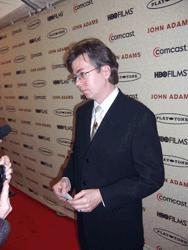 Screenwriter Kurt Ellis
at the Virginia premiere of “John Adams”

The first episode of the series, “Join or Die,” necessarily starts a bit slow, in order to introduce us to Adams and his formidable wife, Abigail (Laura Linney), and establish their relationship. He is a man who is often uncertain of his talents and abilities as a lawyer, confident in his knowledge but, on occasion, prone to offering too much information when making his arguments; she stands behind him at every opportunity, helping him to tweak his oratory without tramping on his masculinity. Adams finds himself with a career-making case as a result of the infamous Boston Massacre of 1770, when British soldiers fired upon a crowd of citizens; when the soldiers are arrested and charged with murder, Adams not only defends them but, indeed, wins them an acquittal, thereby earning a reputation as a man of strong principles. Although Giamatti is mostly reserved in the early minutes of the episode, the courtroom scenes provide him with his first real opportunity to shine, offering ample proof as to why he has received tremendous praise for his performance from virtually all of his fellow participants in the miniseries.

Adams’ victory for the British soldiers is a significant turning point for him, resulting in his cousin, Samuel (yes, the beer guy), suggesting that he serve as one of Massachusetts’ representatives in the Continental Congress, making for a seamless segue into the second episode, “Independence.” It’s no wonder that this is the episode that’s been screened in the various premieres around the country, spotlighting as it does America’s initial steps toward declaring their independence from Britain. We’re introduced to several familiar names, including Benjamin Franklin (Tom Wilkinson), George Washington (David Morse), and Thomas Jefferson (Stephen Dillane), but those who don’t know their history will perhaps be meeting John Dickinson (Zeljko Ivanek, from “Damages”) for the first time. Dickinson, one of the esteemed representatives from the Pennsylvania colony, proves to be a major thorn in the side of Adams and his fellow collaborators in their attempts to secure a unanimous vote for independence. (It would be fair to say that the methodology used to allow Dickinson to save face on the matter has stood the test of time.) Wilkinson’s lighthearted performance as Franklin is wonderful, and Morse paints a picture of Washington as a soft-spoken gentleman with a profound dedication to duty, but Episode 2 also offers Linney a chance to built on the character of Abigail Adams, showing how she was required to be at least as strong as her husband to keep their family together in his absence; the scenes involving their struggle with the horrors of smallpox are turn-your-head-away excruciating, but they result in showing what a determined woman Abigail was. 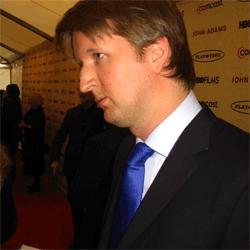 Director Tom Hooper
at the Virginia premiere of “John Adams”

Based on its first two episodes, it’s clear that director Tom Hooper has sought to make “John Adams” work not simply as a drama but also as an authentic historical representation of the era. The cinematography is designed to remind viewers just how dark things were in the days before electricity, but it also works to provide a feeling of foreboding, ominously reminding us that war is right around the corner. Calling the series a “costume drama” is to sell it short; by the end of the second episode, history has truly come alive thanks to the combination of top-notch performances and period accuracy. Not a history buff? You just might be by the end of “John Adams.”

If you only have time to watch one of the two episodes airing tonight, definitely make it “Independence,” but if you’ve got TiVo, be sure to record them both, because, quite frankly, you shouldn’t miss either of them.