Scare of the Day: “Welcome to the Grindhouse: ‘Black Candles’ and ‘Evil Eye'”

Damn you, Quentin Tarantino and Robert Rodriguez! Damn you all to Hell!

I love those guys, don’t get me wrong, but it’s because of their “Grindhouse” flick that I received a couple of DVDs from BCI / Eclipse, each of which features two of the sort of exploitation films from the ‘70s and ‘80s that served as stylistic inspiration for “Planet Terror” and “Death Proof.” When I got them, I mistakenly thought that I might actually enjoy watching these old-school flicks and at least appreciate their kitsch value…and when I saw these descriptions, I thought, “This is Scare of the Day material if I’ve ever seen it.” 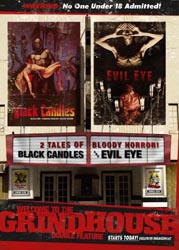 Black Candles: Carol and her boyfriend, Paul, travel to England after the unexpected death of her brother. Once there, she finds out her sister-in-law is involved in a satanic cult, and she finds out that Paul is being drawn into the cult.

Evil Eye: Peter Crane is having nightmares about murdering someone. His psychiatrist, Doctor Stone, has him hospitalized for being unable to differentiate between dream and reality. Soon, people start turning up dead at the hospital. Is Peter really a killer, or is there something more sinister afoot?

In between all of this sex, you’re left with a movie that’d be perfect if The Playboy Channel ever decided to do its own version of “Mystery Science Theater 3000,” with bad foreign dialogue dubbed into bad English dialogue. Once you take the goat out of the equation, the only remotely scary moment during the first hour of the film occurs when a face unexpectedly appears in a window, which is pretty pitiful for a movie about a satanic cult. Mind you, ten minutes before the movie ends, we do get a thoroughly revolting sequence where a greasy fat man gets a sword shoved right up the ol’ poop chute, but it’s hardly a moment that you’d describe as a saving grace. When the movie ends with the revelation that all of its events were just a dream, your only wish will be that you could say the same. Then again, I should’ve known this thing was going to suck just based on the fact that its original Spanish title literally translated into “The Sex Rites of the Devil”; anyone who wastes a perfect good title like that by changing it to “Black Candles” clearly doesn’t know the first thing about quality motion pictures.

On the flip side of the coin, “Evil Eye” is extremely entertaining…though, okay, it’s as much for the wrong reasons as for the right ones. There are some highly disconcerting moments here…and not the having-sex-with-a-goat-kind, but some legitimately creepy stuff. Unfortunately, there are also moments which are so awful that I’m still tempted to declare it to be one of the best bad movies I’ve seen in years. Frankly, it earned that honor with one line, then permanently secured it with another…but I’ll get to those in a moment.

As noted above, the film’s premise revolves around a rich playboy named Peter Crane (Jorge Rivero) who keeps having nightmares about having murdered people. Director Mario Siciliano, who was also responsible for “Happy Sex,” “Erotic Family,” and “Orgasmo Non-Stop,” somehow manages to resist his baser instincts and avoid incorporating too many sex scenes into the proceedings, even scoring several legitimately creepy moments over the course of the film’s 90+ minutes, but it’s the dialogue that dooms “Evil Eye.” Blame the melodramatic dubbing into English if you wish, but the lines themselves are the real killer here, such as when Peter complaints to his psychiatrist (played by Robert Conte, a.k.a. Don Brizio in “The Godfather”) that he’s having awful dreams. When he’s asked if he takes drugs, he snaps back, “No way, I don’t like that crap…unless you count whiskey and tobacco as drugs.”

My personal favorite amongst the film’s many completely surreal lines comes via this conversation, where Peter’s longtime paramour meets his psychiatrist’s lovely partner.

Tanya: Who’s the lady?
Peter: Dr. Sarah Turner, this is Tanya.
Tanya: Well, I don’t her very much.
Sarah: Yes, you’re probably just tuning in on my reaction to you.
Tanya: I do tune in on grand pianos.

“Evil Eye” is definitely a must-see film…as in, “You must see just how bad the dialogue is.” But unlike “Black Candles,” at least you won’t feel like you need a shower after watching it. I should mention, though, that the DVD offers the full “grindhouse” experience by providing the original trailers for other films in the series, and while I can’t say they necessarily look any better, they were enough of a hoot that I almost wanted to check them out.