Scare of the Day: “Jekyll”

Since we’ve already made one visit to the world of the BBC, let us keep that trend alive by chatting today of a second, more recent horror-themed endeavor by the network: “Jekyll,” an updating…or, more accurately, a continuation of the classic Robert Louis Stevenson tale of a man and his dark side. 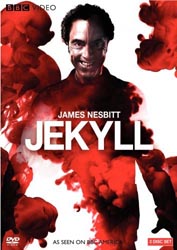 Well, actually, saying that it’s a continuation isn’t exactly true, either. This is, you see, a rather complex tale, one which takes place predominantly in present day England while also taking a few trips into the past as well, including at least one jaunt to the era of Stevenson’s original tale…but, then, trying to explain the why and wherefore of said expeditions would give away more of the plot than would be appropriate for us to do, so let’s avoid that and just offer up the general concept of the series.

In this incarnation, we don’t actually have a Dr. Jekyll, per se. In fact, his name is Dr. Jackman…but, of course, he’s not unaware of the similarity between his name and the classic Stevenson character, especially given that he himself has a darker self who comes out to play on occasion. There’s no potion involved in this transformation, however, nor are the differences between Dr. Jackman and his Mr. Hyde nearly as dramatic as those in most other versions of the tale; here, James Nesbitt plays both roles, and it’s more to do with adjustments in hairline and facial expressions than anything like, say, becoming a monstrous hairy figure. 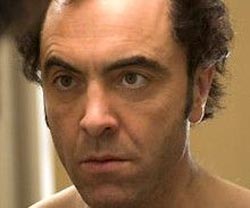 There’s a further difference between Drs. Jekyll and Jackman that adds quite an important wrinkle to the proceedings: Dr. Jackman is married with children, and Mrs. Jackman (Gina Bellman) hasn’t a clue about her husband’s “friend.” This is mostly due to Jackman playing it as safe as humanly possible, creating a co-existence with Hyde via back-and-forth messages (notes, tape recordings, etcetera) without ever letting him in on the fact that he has a family out there. Inevitably, of course, Hyde finds out, and it’s not a pretty scene at all. The back-and-forth between Jackman and Hyde isn’t the end-all and be-all of “Jekyll,” however, but, unfortunately, to tell you a great deal more would be to give away the surprising fun of the series. Suffice it to say that there are others in the world who are aware of Mr. Hyde’s existence and are quite interested in finding out exactly how the transformation occurs…and, more importantly, how to reproduce it; it’s easier said than done to get hold of Mr. Hyde, however, since he’s full of surprises, including near-superhuman strength and senses. 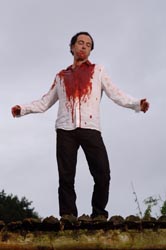 As one might expect, much of the success of “Jekyll” sits on the shoulders of Nesbitt, who manages to keep things subtle while playing Jackman and then taking it well over the top when portraying Hyde…and, boy, is it way, way, way over the top at times. Don’t get me wrong, he’s equally funny and chilling, and if you’ve never seen Nesbitt’s work before, watching his work in the series will put his name on your “keep an eye out for that guy” list. But even with that said, there are still a few occasions during the course of these six episodes where one wonders if the director had gone to lunch, leaving no-one to tell Nesbitt to “reign it in just a tad, Jimmy.”

As with so many other British series, “Jekyll” ends long before it’s worn out its welcome and, indeed, leaves viewers wanting more, providing a final scene which, even after gripping the arms of my chair for all six episodes, I still didn’t see coming. (My wife and I watched it separately, and she called me after I watched it, mostly just to say, “Holy shit, could you believe that?”) There’s been no word on whether we’ll get any further adventures of Dr. Jackman and his legacy, but we can always hope.