Welllllll…it wasn’t as bad as I thought it might be. But it didn’t exactly find me cheering for more, either.

Over the past few months, you may or may not have thrilled to the saga of “Moonlight,” CBS’s decidedly troubled drama about a vampire turned detective who in no way resembles this dude I know who used to work for Wolfram & Hart, so here’s a quick recap of the highlights and lowlights of what’s happened:

It started off being called “Twilight,” under the writing team of Trevor Munson (“Lone Star State of Mind”) and Ron Koslow (“Beauty and the Beast”), with executive producers Joel Silver and Gerard Bocaccio; Alex O’Laughlin (“The Shield”), Amber Valletta (“Hitch”), Rade Sherbedgia (“24”), and Shannon Lucio (“The O.C.”) were hired to star, and Rod Holcomb was set to direct. But, then…

1. The name changed from “Twilight” to “Moonlight.”
2. Lucio departed, eventually to be replaced by Sophia Miles (“Underworld”).
3. David Greenwalt, possibly because he missed working on “Angel,” came aboard as the show runner.
4. Amber Valetta and Rade Sherbedgia departed and were replaced by Shannyn Sossamon (“Dirt”) and Jason Dohring (“Veronica Mars”), respectively.
5. David Greenwalt, possibly because he quickly grew tired of all the “Angel” jokes, left as show runner, citing “health reasons,” and was replaced by Chip Johannessen.

As a result of all these changes, the show was retooled so many times that even when CBS offered its presentation for the show at the Television Critics Association Press Tour in July, the best they could offer us as an example of what to expect was a segment with the groan-inducing title of “Interview with a Vampire,” where the main character of “Moonlight” – Mick St. John – sits in a dark room and is quizzed by an off-screen journalist about what it’s like to be a vampire.

I don’t know about you, but no-one on the press tour was very impressed, and, basically, we were all left thinking, “Oh, God, this thing is gonna do a major, major bellyflop”…and this was before David Greenwalt left! (He was basically the only reason any of us were maintaining a shred of hope for the show.)

So here we are in that middle ground between mid-September and late September, with the premiere of “Moonlight” only a handful of days away, and, finally, we’ve gotten our hands on what’s almost certainly going to be the version of the pilot which airs on 9/28. And…oh, right, this is where you came in. 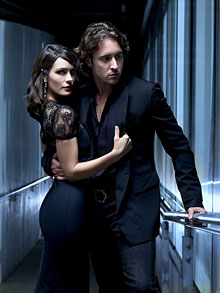 The first bad sign is that the series opens by recycling the “Interview with a Vampire” footage that was screened at the press tour. That ain’t good. I mean, yeah, it sets up the mythos of the vampire for the purposes of this particular show – they don’t sleep in coffins, garlic doesn’t do them any damage, sunlight ain’t good for ’em but it doesn’t make ’em burst into flame outright, and so forth – but it’s set up as being something that Mick is dreaming, and, well, it just feels lazy. From there, the first smile-inspiring moment came when we realized that Kevin Weisman (Marshall Flinkman on “Alias”) had quietly slipped into the cast. Weisman plays the cameraman of Beth Turner (Myles), an online TV journalist who, while investigating the murder of a co-ed, invents a tagline which suggests that the killing is rather vampiric in nature. This suggestion catches St. John’s ear, and he heads over to the scene of the crime, where he encounters Beth and realizes that he recognizes her from an encounter they had some years before…and, yes, that connection is paramount to the premise of “Moonlight.”

Everybody likes a good vampire story. The problem is, “Moonlight” doesn’t look like it is a good vampire story. Since we’re talking about a bunch of bloodsuckers, it’s only appropriate that we should go for the jugular and say outright that, yes, “Moonlight” does suffer from its comparison to “Angel.” David Boreanaz was dark, brooding, and looked like both a vampire and a bad-ass; Alex O’Laughlin puts on sunglasses and leers at people and, frankly, he just doesn’t look very intimidating. As a vampire, Mick St. John’s greatest gift seems to be that he can leave a room quickly and quietly; the only truly kick-ass fight scene in the pilot comes via flashback, and it’s when he’s fighting his former wife, Coraline, who we’re led to believe is dead (which almost certainly means that she is not). The most intriguing character on the show isn’t even Mick; it’s his buddy and fellow vampire, Josef Konstantin, and, truthfully, he’s probably only intriguing because he’s played by Dohring, who comes off just as snarky here as he always did when he was busy being Logan Echolls on “Veronica Mars.”

Maybe I’m being too hard on “Moonlight.” Maybe the show will find its feet after everyone finally gets settled and comfortable. Unfortunately, based on what’s been offered up for the first episode, it’s looking like we might have another cheese-fest like “Forever Knight” on our hands…and as vampire-centric TV series go, that ain’t necessarily the one you want to use as a touchstone.