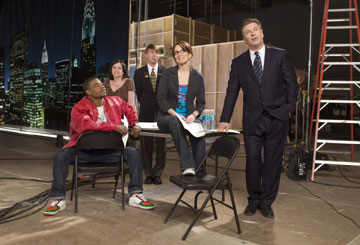 Seriously, I really do. She’s totally the kind of woman who I’d make a fool of myself over if I were still single…but I’m not, so I won’t. And I was very proud of myself for keeping my cool when I got to talk to both Fey and her “30 Rock” co-star, Jane Krakowski, about their new show. Clearly, I was more focused on Tina than Jane, but, honestly, that’s more because – as I explain to Jane – I hadn’t yet seen the new version of the pilot when I was talking to the two of them. (Krakowski was added after the fact, as you’ll read below.) In closing, let me just say that it’s a good thing it was a phone call rather than an in-person conversation; it allowed me to get away with victoriously pumping my fist in the air whenever I succeeded in making Tina Fey laugh.

Bullz-Eye: Tina, do you happen to recall the obscenities that you uttered when you first heard about “Studio 60 on the Sunset Strip”?

Tina Fey: (Laughs) I swear so much all the time, anyway, that it probably wouldn’t even have interrupted my constant flow of swearing. That was probably happening over just the quality of my lunch.

BE: Did you find yourself a little disconcerted knowing that there was going to be a similar-premised show on the air at the same time?

TF: Well, it’s funny, because I had friends coming up to me, saying, like, “Oh, I’m so sorry that you’re not going to get to do your show!” And I said, “Well, y’know, I haven’t really heard anything…” And, really, within the same day, (NBC President) Kevin Reilly called me at home to assure me that we were still…because we were in pre-production for the pilot, and he assured me that we were still going to shoot the pilot and that he believed in both shows, and so I took him at his word. And so far, so good.

BE: And I’m one of those who has not seen the revised pilot yet, but I’m led to understand that, Jane, you’re taking over the role that more or less belonged to Rachel (Dratch) in the original pilot…?

Jane Krakowski: Um, well, I’m playing the star of “The Girlie Show,” which is the fictional show within the show. The role has been quite rewritten, I would say, and made a little bit different, but I love the show so much, and I was so thrilled to be asked to join into the cast.

TF: And what sort of what happened was, once we realized after doing the pilot that we were never going to see sketches, then we wanted to take Rachel, who’s a sketch player, and use her differently. She’s still in the show and she’s going to play a series of characters; if you do get a chance to see the revised pilot, you’ll see she plays a cat wrangler in that pilot, and then she’ll come back another week as a different character, and a week or two after that, she’ll come back as a different character.

BE: How much of Tracy Morgan’s character is inspired by Dave Chappelle?

TF: Well… (laughs) …I will say that I don’t know Dave – I’ve barely ever met him – but I do know Tracy, and, so, I would say that it’s primarily Tracy if Tracy were nuts, more than anybody else. But I think anything any celebrity does, let alone an African-American celebrity, is gonna be fair game for Tracy to do. Maybe Tracy will leave a bag with a million dollars in jewelry in the airport, I don’t know!

BE: Will “The Girly Show” have guest hosts or celebrity guests?

TF: I don’t think it will. I don’t think it’s that kind of show…unless all of us change our mind and it does. But I don’t think that’s really on the horizon right now. I’ve spent nine years writing for celebrity guest hosts, and I’m very excited to write for just my cast.

BE: Tina, what “Saturday Night Live” joke or sketch are you the most proud of?

TF: Oh, that’s a good question! Most proud of… (Pauses) I wrote a sketch once called “Census.” It was about a census taker, and it was just Christopher Walken and Tim Meadows, just the two of them, and that was maybe my favorite sketch that I ever wrote. Unfortunately, it was on the same show as “we need more cowbell,” so it has long since been forgotten! But that was maybe the best show that we had in the whole nine years that I was here, that show with Christopher Walken.

BE: Was there ever a sketch that didn’t make it on the air that you were really thought should’ve?

TF: Usually, the ones that don’t make it, it’s for very good cause! They’re usually pretty stinky!

BE: And a throwaway closer: has anyone ever approached you that was writing an unofficial biography of Lindsay Lohan, looking for dirt from the set of “Mean Girls”?

TF: (Laughs) No…but I am open to offers if they’re extremely lucrative.